In this tutorial, I will show how to alter the source code to configure game controllers for the Wolfenstein 3D port, Wolf4SDL . 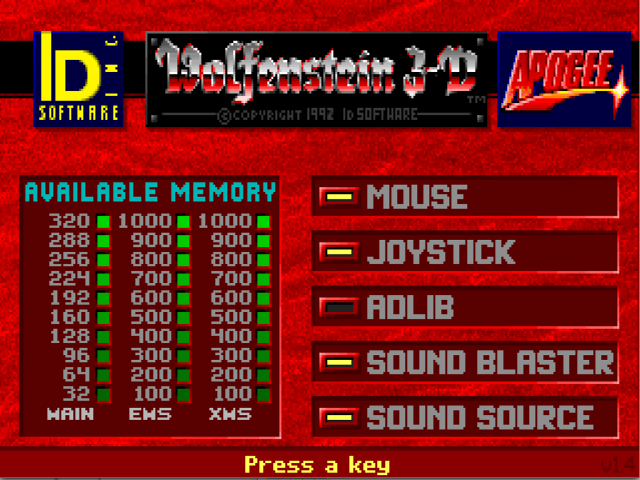 Please note that this hack has only been tested on the PS3 controller and will remap buttons only on your controller, not analogue sticks.

Wolf4SDL does come with a default game controller mapping so if you do not have a PS3 controller (or similar), then I suggest that you try your game controller to find what the mapping is and remap if required.

To do this, enable your game controller on your pi, then launch Wolf4SDL. In the launch screen, the joystick option should be lit as in the screenshot above. Press any button on your controller to start the game. In game, make a note of which buttons are mapped to which action. The actions in Wolfenstein 3D are given below, if you're unfamiliar with the game.

If you do not know the button numbers of your controller then you need to use the joystick app which you can install with the command:

To launch the utility, run the command.

Press a button on your controller and make a note of which number changes in the screen output. Press CTRL+C to exit.

By default, the left analogue stick on the PS3 controller is already configured for walking forwards and backwards and turning left and right.

The code to remap the buttons on your games controllers are lines 61 to 63 in the file wl_play.cpp. To edit the file, run the following commands.

The existing code is reproduced below. I have added the blue numbers in brackets to make clear what the default game controller mapping is. They do not appear in the original code.

The code says that button 0 (SELECT on the PS3 controller) fires weapon, button 1 (L3) strafes, button 2 (R3) opens doors and so on.

The default configuration is pretty much unplayable so the mapping below is the one I decided to use with my PS3 controller (It may not be ideal for everyone so feel free to alter it to suit).


Once I decided the mapping, I rearranged the actions (bt_pause, bt_escape etc.) into numerical order for button 0, button 1 and so on. Any unused buttons, e.g. button 1, was assigned bt_nobutton. As a check, there should have been 6 buttons assigned bt_nobutton in the final version.

For the PS3 controller, the new code I used was as follows:

I replaced the existing code with the above and saved wl_play.cpp.  Then I recompiled the source code by running the command make.

As mentioned earlier, this hack works for the PS3 and similar controllers. Please let me know how other controllers work in the comments. It would be great if you could post your code changes. I can update this section for the benefit of others as I receive info.